Telex: Anticensorship in the Network Infrastructure 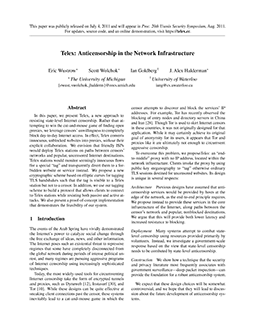 Named runner-up for the 2012 PET Award for outstanding research in privacy enhancing technologies!

In this paper, we present Telex, a new approach to resisting state-level Internet censorship. Rather than attempting to win the cat-and-mouse game of finding open proxies, we leverage censors’ unwillingness to completely block day-to-day Internet access. In effect, Telex converts innocuous, unblocked websites into proxies, without their explicit collaboration. We envision that friendly ISPs would deploy Telex stations on paths between censors’ networks and popular, uncensored Internet destinations. Telex stations would monitor seemingly innocuous flows for a special “tag” and transparently divert them to a forbidden website or service instead. We propose a new cryptographic scheme based on elliptic curves for tagging TLS handshakes such that the tag is visible to a Telex station but not to a censor. In addition, we use our tagging scheme to build a protocol that allows clients to connect to Telex stations while resisting both passive and active attacks. We also present a proof-of-concept implementation that demonstrates the feasibility of our system.